> Travel > 5 Of The Cheapest Backpacking Destinations You Should Visit In Asia! 5 Of The Cheapest Backpacking Destinations You Should Visit In Asia!

There are many ways to explicate the importance of travel – it makes us grow as people through submerging ourselves in the unfamiliar, it enhances our perspective, hones our ability to appreciate what we have, and provides us with an escape.

Travel for most, is also a luxury. There are few feelings as miserable as returning from a trip heavy-hearted- faced with the prospect of going back to routine- to a bank account that has become so dry, the Sahara desert could be put to shame. Travelling doesn’t always have to cost a bomb. With proper budget management, research and a healthy amount of savings, jet-setting to lands unknown can prove far more enriching than holing up in a 5-star resort for a week.

Budget travelling isn’t about skipping showers and sleeping in dodgy rooms to pay for your next meal. We’ve done the legwork and found 5 countries you can travel to on a student budget, while enjoying your trip to its fullest and save money!

Best part: your bank balance won’t hate you back. First Things First – Save Money Before Your Trip

There are a multitude of travel sites to help you save some dollars, but save more with ShopBack, and receive money for shopping that you can set aside for your vacation! Flights are the first step to a holiday, so secure a cheap trip with Exepdia and receive up to a 8% cashback. Lodging is next on the list. Clinching a stay at anything from a hostel to budget hotel room comes with further discounts when booking through Agoda, where you get a ₱400 cashback just for being a spendthrift. For a holistic scope at the best travel packages available, use Expedia and be entitled to an 8% cashback. Groupon also has opportunities to give you more bang for your buck with its seasonal travel deals, plus a 6% cashback when you shop with us.

Not a member of ShopBack yet?
Get ₱150 as a bonus by clicking this link Marrying quaint Asian culture, a history built upon violent discord, and the steady influx of Westernisation, Ho Chi Minh City remains one of the most budget-friendly Southeast Asian travel destinations. There are few other cities that move as quickly as Ho Chi Minh, and with a fast-paced city life comes a stream of opportunities for any traveller to indulge in. A day could carry you through the authentic experience of visiting a street market, to wandering around numerous landmarks, exploring the winding streets of the various Districts and indulging in Ho Chi Minh’s native street food out of small stools by the busy roads. Indigenous dishes like the flavourful phở, the hearty and filling sandwich, báhn mì, fresh Vietnamese spring rolls, and thickly brewed coffee can all be enjoyed for a low price, if you patronise the eateries most frequented by locals.

A budget of ₱70 is enough to get you around the labyrinthine city for a day, enjoy three budget meals and unwind with a few cans of cheap beer.

Tip: Travelling around Ho Chi Minh city by taxi is insanely affordable, if you avoid independent cabbies that are out to scam tourists by ramping up the meter speed. Only flag Mai Linh and Vinasun taxis to ensure comfortable rides that can go as low as ₱65. With a population of over 1.27 billion people, India probably wouldn’t cut the margin for travellers needing some peace and quiet. Goa, however, is a different story. As India’s smallest state, the city’s variegated landscape encompasses clear, coastal beaches, the dense greenery of river valleys snaking upwards into forested mountain ranges – all steeped in an enigmatic charm that is removed from India’s signature hectic buzz. The languid beaches in South Goa holds the strongest allure for visitors, though lovers of off-the-beaten track ventures can soak up Goa’s colonial architecture in Panjim, the hippie trails of Chapora, or the Mesolithic art sites along the coastline.

With so many sights to absorb in Goa, splurging on paid entertainment shouldn’t be a priority. Instead of dining at restaurants, opt for experiencing Goan delicacies at the many beach shacks along the coast. Seafood is literally fresh out the water, and you’ll experience sumptuous curries like never before.

Click here to find out more about budget room in Goa, India Known as The Pearl of Asia, Cambodia’s capital city of Phnom Penh has been booming immensely in its economic sector, which makes the low cost of living for visitors all the more surprising. Phnom Penh is far less crowded with tourists than its sister city, Siem Reap, but doesn’t discount on beauty. While the effects of the cruel Khmer Rouge militant rule still linger, Phnom Penh has regained its global footing to become Asia’s mecca of cool. 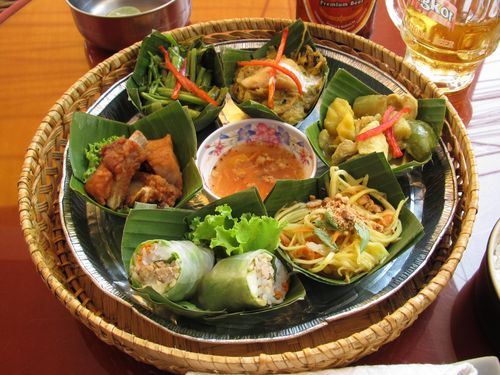 Begin the day by heading to the Russian or Central markets for a sizeable Cambodian meal of bai sach chrouk (grilled pork with rice), or kuy teav (pork and seafood rice noodle soup) for just a little more than a dollar, before tackling the city. Must-see places include the charming neighbourhood of Boeung Keng Kang, where a large local marketplace shares domain with stylish cafés. Also visit the various national monuments, such as the Ounalom Pagoda, Royal Palace and Wat Phnom Hill for a dash of cultural awakening, or the Tuol Sleng Genocidal Museum for a severe jolt of the brutality that mankind is capable of. After a long day, experience the sunset with unparalled views along the Riverfront; here, a stretch of pubs and restaurants open up to sublime views of three great rivers that meet – the Tonle Sap, Mekong Delta and Bassac.

A budget of ₱600 a day should get you around the city comfortably, with a tuk tuk ride or two thrown in to ease the bulk of walking.

Tip: Get to know a local tuk tuk driver who can ferry you around on the regular for the duration of your trip. It works like calling a taxi, sans the unpredictable waiting time and the extra charges! If you’re nice enough to your driver, he may even dispense some localized tips on where you can save on dining and entertainment in Phnom Penh.

For serious lovers of the genuine Southeast Asian travel experience, Yangon is a city to visit unlike any other. Its youth as an open nation leaves the country very much free from the saturation of global brands and ideals, while showcasing an array of picturesque parks; achingly beautiful religious monuments and a cultural uniqueness so removed from imperialistic pollution that you feel you’ve travelled back in time.

Yangon is not a city for shopping, or whirlwind proclivities. Instead, submerge yourself in nature by scouting out the city’s tranquil lakes, namely the Inya and Kandawgyi Lake; the latter of which features the Karaweik, a traditional Burmese royal boat. The Shwedagon Pagoda is another national landmark, and is the most important religious site in Yangon. The Pagoda’s towering stupa, covered in real gold, dominates the skyline, and is especially beautiful at night. Entering the Pagoda’s grounds is a whole other jaw-dropping matter, where your mind will be torn between the staggering sheen of the gilded interiors and the reverence that lingers in the air from the Buddhist worshippers.

The generosity of the Burmese when it comes to value-for-money food is something that should excite any foodie. A traditional meal should cost around 50, where stepping into any saa thauk sain (restaurant in Burmese) warrants you a hefty portion of rice, paired with a staggering selection of side dishes that range from lentils, vegetables, soup, mutton, pork belly, and curries to dig into. Complimentary desserts of tamarind candy and pickled tealeaves are usually included at the end of a meal. The Burmese are also fond of noodle dishes. Try the national dish, mohinga, made with rice noodles in a fragrant, and spicy fish and shallot broth, topped with crispy vegetables for texture.

Tip: Travelling around Yangon can be easily done on foot with a map and a keen sense of direction. Avoid racking up taxi charges, and get walking to save some dough.

Click here to find out more about cheap places to stay in Yangon, Myanmar

When one thinks of visiting Thailand, tourist hotspots like Bangkok and Phuket come to mind. Chiang Mai’s distance from the fervid tourism that plagues its sibling cities only adds to why it’s worth the venture. Chiang Mai has transcended from its roots as a small city built upon rice paddy fields, to a Thai cocktail of arresting nature, chill vibes and delectable cuisine, with the added advantage of isolation from the subcontinental rush that sweeps most of Southeast Asia.

Chiang Mai’s high altitude also makes it a nearby alternative to experience cool weather during the colder months if you’re planning to trek through the Doi Suthep Mountains. Chiang Mai is also home to numerous hill tribes, particularly near the Chiang Dao Cave. Here you can meet people of the Karen Long Neck Tribe to witness indigenous culture away from a National Geographic television programme.

The city’s seclusion may prove useful for a much needed respite, but don’t be fooled. Once the sun sets, Chiang Mai’s entertainment scene is riveting, vibrant, and full of Thai flair. Up and coming nightclubs such as Infinity, Mandalay and Believe are modern hubs that draw locals and tourists alike for a little nighttime action.

The country has cheap food available at every corner, and even Western options aren’t as painful on the pocket as they are in other Asian countries. Without chances for crazy splurging on clothes, except for the Night Bazaar, you’ll be saving and avoiding temptation at the same time – all the more to spend at the clubs!

Tip: Instead of buying an excess of mineral water bottles to keep yourself hydrated, look out for the water vending machines along the streets of Chiang Mai where clean water is dispensed for the extremely low price of ₱13 a litre to rack up some small savings.